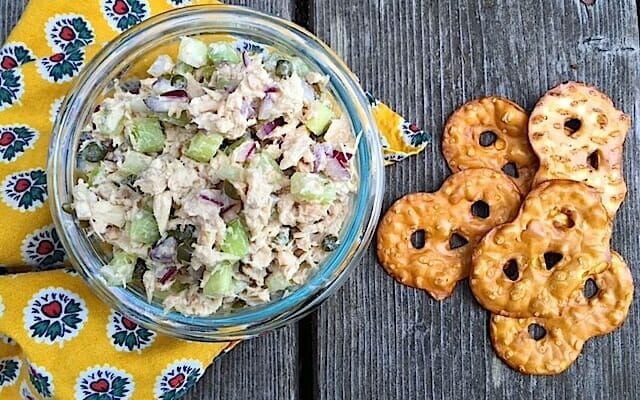 Pregnant with my middle daughter, Rosie, I craved exactly one food: Tuna. Knowing this was a wholesome choice, rich in the Omega-3 fats that are key for a baby’s developing brain, I indulged in tuna sandwiches on a regular basis throughout my pregnancy. It was shortly after her birth that I came to find out that tuna is a source of the neurotoxin mercury. I was stricken with guilt, afraid that I’d inadvertently harmed my sweet girl.  That worry stuck with me until just recently when I learned there is good news on the fish and mercury front. It was music to my ears.

That mercury is present in tuna, along with other varieties of fish, hasn’t changed. But nothing in the body works in a vacuum. Other factors play a role in the impact of mercury, most notably, the mineral selenium. It turns out that with enough selenium, the toxic potential of mercury can be ameliorated. And what is one of the biggest sources of selenium on the planet?

Translation: eating fish with a high selenium to mercury ratio provides built-in protection against mercury. The chart below shows these ratios in a number of species. You’ll note that only two varieties have as much or more mercury than selenium.  The biggest offender? The Pilot Whale, which  I’d venture to guess is not a part of your regular diet.

If you want to learn more about this, I’ll turn you over to my friend Sally who WROTE A TERRIFIC EXPLANATION on Parents.com. It’s worth reading.

In the meantime, I’m off to make myself a tuna salmon salad. It makes a doubly nutritious superfood sandwich.

Won’t you join me?

I call this a "superfood" sandwich because it's packed with tuna AND salmon, which together are a powerhouse of protein, omega-3 fats, and selenium. The combination of the fish along with capers, onions, and crunchy celery is a tasty one. Spoon it between slices of bread for a sandwich, or serve along with crackers, cut up vegetables, or pretzel thins for a satisfying snack.
Course Lunch, Snack
Prep Time 10 minutes
Total Time 10 minutes
Author Katie Morford

It’s so good to know that you don’t have to worry about eating fish and that you can give it to your kids, too. Love the sandwich recipe!

Thanks Liz. I find this exciting news, in part because it alleviates my own worries, AND because I can feel comfortable making my beloved tuna sandwiches more regularly.

This is really good to know; I just wish I loved fish more.

Fascinating given how much time you spend on the water…that said, it’s never too late Anne!

Do they eat tuna sammies in Korea??

Thanks for linking to my post for Parents! I agree that this news was such a relief to me. I admit I’d been a little bit leery of eating tuna, even though I love it. Now I am not worried!

You did such a good job with the subject, why reinvent the wheel….happy to send my people over to you.

I was so happy to hear the news too! That graphic is so great. Love having different tuna sandwich recipes. can’t wait to try yours!