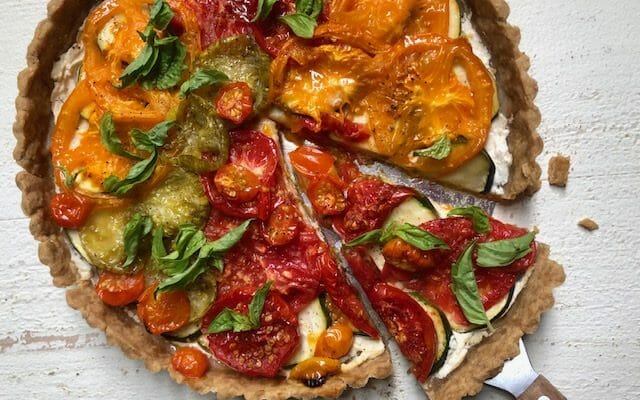 Tomatoes were late bloomers this year, at least in my corner of the country. It was slim pickings until July, but now they’re everywhere and even the heirloom varieties are somewhat affordable. I’ve been busy making up for lost time, serving tomatoes in some form or another morning, noon and night. This Tomato Zucchini Tart with Olive Oil Crust is one of the better inventions to come out of this late-summer tomato glut.

How to Make Tomato Zucchini Tart

I imagine plenty of folks might head for the hills when they hear “vegetable tart”…thinking it’s too complicated for their cooking style. Not so! Check out how easy it is to bang this thing out in a few simple steps:

2. Then, spread a thin layer of soft goat cheese along the bottom.

3. Top with a layer of thinly sliced zucchini along with salt and pepper.

4. Finish with sliced tomatoes of any variety and more salt and pepper.

Now it’s just a matter of getting it into a 400 degree oven and keeping yourself busy for the hour that it bakes. That’s it.

Is this Tart Healthy?

Heck Yes! This tart definitely gets a nod for nutrition from me. Using olive oil instead of butter means more healthy fats and less saturated ones. The crust is entirely whole grain and vegetables play a starring role. It calls for goat cheese, an ingredient that often gets a green light among folks with a lactose intolerance. And if you’d prefer this to be vegan, use a spreadable herby vegan cheese instead of goat cheese. The result is a tart that banks eight grams of fiber per serving all at 368 calories.

While there’s nothing quite like a traditional all-butter, rolled out pastry crust, I’ve recently been digging the press-in-the-pan style of this recipe. It’s much quicker and easier to make, ideal for weeknight meals (or home cooks who think they can’t tackle pastry). I’m especially keen on this one, since it’s a whole-grain crust and is made with olive oil, which I always have in my pantry. You can make the crust a day ahead if you like, covering it with plastic and storing it in the fridge until you’re ready to fill and bake.

Tomatoes and zucchini are just the starting point for what can go into this same crust. When not in season, consider these combinations:

How to Serve Tomato Zucchini Tart

I’ve mostly been serving this tart as part of weeknight dinners with a salad on the side. I also made it for a small dinner party alongside a charcuterie plate, a big salad, with peach pavlova for dessert. I also think it would be a great dish to bring to a potluck (enough lasagnas, people!). It’s just as suitable for brunch or lunch, and even packs up for desk or school lunches (though it’s on the delicate side). If you have leftovers, they warm up easily in the oven or toaster oven the next day.

If you like this Tomato Zucchini Tart, check out these other tart and pie recipes, too:

Corn and Zucchini Pie by Pinch of Yum

A bright, summery vegetable tart that is easy to make, healthy to eat, and plainly delicious. The crust is done in a single bowl using olive oil and whole-wheat flour and then pressed right in the tart pan. There’s no magic formula for how the tart is assembled. You can add more or less of the vegetables and it needn’t be Pinterest-pretty to be delicious. If tomatoes and zucchini are out of season, this works well with other vegetables, such as sautéed leeks, mushrooms, onions, and/or fennel.

Have you used almond flour in place of whole wheat pastry flour?

I haven’t. I’m not sure it would hold together with just almond flour (you might need an egg in there). If you are looking for this to be gluten-free, you could try an all-purpose GF flour.

Bit confused why this is listed in the vegan friendly category as it has goats cheese?

Hi Tasha, Good question. I have the category called “vegan-friendly” rather than “vegan” when recipes can be easily adapted accordingly. In the post I mention, “And if you’d prefer this to be vegan, use a spreadable herby vegan cheese instead of goat cheese.” Hope that helps.

Can’t wait to try this recipe, especially the crust. I have been making tomato pies and also zucchini tarts this summer, also. Can you tell me why do you cook on the bottom rack?

just to confirm, you put the cheese on top of the unbaked crust?

Made this for the second time and used peppers instead of zucchini because of your recommendation (and because I have a ton of peppers!). Turned out great again. Wonderful summer dish. I’ll be sad when heirlooms are no longer available.

So glad it was a success. I really like it with peppers, too. Thanks for the comment.

Hi! I’m definitely going to make this today! I’m not a goat cheese fan, but it looks like something “spreadable” would work as a substitute, like Boursin or Beecher’s Handmade Cheese. I’ll look for that, but if you have any suggestions I’d love to hear them!

I’m guessing you’ve made this by now. I think Boursin would be great. I’m not familiar with Beecher’s. Let me know how it went if you did make it!

do you need to salt the zucchini and tomatoes first to get moisture out? worry about it making the crust soggy!

That hasn’t been an issue for me, so I’ve not salted the veggies first.