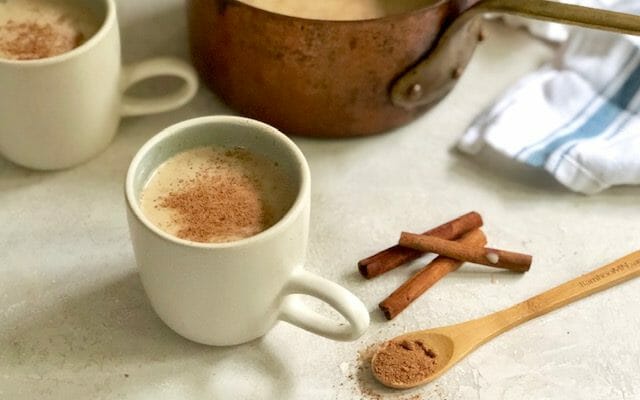 A few weeks ago I made a pot of chai for the 60-plus people I anticipated would come to a cooking class I was teaching that day. That’s a lot of chai, so I pulled out my largest cooking vessel, one that could easily house a small child. When it came time to brew the tea, I realized my recipe was more complicated than I remembered. It called for several different whole spices, which I didn’t have, and involved straining the entire thing through a sieve, a feat I wasn’t sure I could manage singlehandedly. I knew it was a good recipe, but I wondered if it could be good without requiring a special trip to the market or risking bodily harm from hot liquid. And so I simplified it into an easy chai recipe. Initially for my own ease, ultimately for yours too.

In India and other parts of Central Asia, chai is simply tea. In fact, the Hindi word chai translates literally to “tea”, which means all the years I was offering friends a cup of chai tea, I was actually saying, “would you like a cup of tea tea?” Here in the west, we’ve come to associate chai with an Indian preparation that is deeply spiced, milky, and pleasingly sweet, without being cloyingly so.  You make it by steeping spices that can vary by region or household, but commonly include cinnamon, cardamom, ginger, and cloves.

Cultures the world over have preached the healing properties of tea for centuries, but it’s only recently that this has been backed up by science. Black tea, from which chai is brewed, is rich in polyphenols, a powerful antioxidant. The caffeine in black tea can have upsides too, linked with greater mental focus. Just be sure to cut yourself off from the caffeine early enough in the day that it doesn’t interfere with your slumber.

To me, chai is a cup of comfort, much like a mug of hot cocoa. And like cocoa, anything that comes from a box, carton, or store-bought mix can’t hold a candle to one you make yourself. Lately, it’s been my go-to brew when real comfort is in order, whether it’s one of my girls under the weather or a friend suffering a loss. A glass jug filled with homemade chai delivered to a doorstep is love in a jar, if you ask me.

Making chai isn’t tricky, it just requires a handful of spices and a bit of patience. Here’s the step-by-step tutorial  (with an easy chai recipe below).

Combine thinly sliced fresh ginger, cloves, cinnamon, cardamom, and vanilla, along with honey and sugar in 2 cups of water. Bring to a boil and then simmer for five minutes.

Scoop out the tea bags, ginger slices, and cinnamon stick.

Add two cups of milk. I prefer whole or two percent milk here, since a little richness goes a long way. You can also use plant milk. My preferred one is a blend of almond and coconut milk.

Gently heat the tea to your liking, pour into mugs, and savor every sip.

Chai, a milky, deeply spiced, and lightly sweetened tea, is a comforting brew if ever there was one. Simply steep ginger and spices with black tea, honey, and sugar, add milk, and pour.

Sounds delicious! Can the base be prepared in advance and stored in the fridge? How long would it keep?

That sounds like a great idea. I would think a week at least, since it won’t have the milk and you’ll have removed the ginger and cinnamon.

Just made it – delicious!

Love this chai! For my taste, half the sugar and honey was perfect. I’ll be making it often 🙂

That’s a great point, Rosemary. I will make a note in the recipe, since everyone has a different taste for sweet.

Hi Katie!
I’m so glad to have this recipe. I will probably try it with honey alone. I don’t often come across recipes with two sweeteners. Is it simply about taste?
Thank you!

Honey has a more dominant flavor than sugar and I like the balance here. But by all means, just use honey. Maybe use a little less and then add more if needed, since honey is a little sweeter than sugar (hence all those bees 🙂

I agree with you about how complicated some chai tea recipes are. I searched
endlessly. I found your recipe and I thank you

This was so good! I think I put too much clove though. But I will totally do this again, with the RIGHT amount of clove😀

Oh, I’m so glad. It’s such a warm and comforting drink! And yes, that clove can overpower 🙂

I made this at home – It was great!

Making this now and the house has a beautiful aroma. Thanks!

Definitely have to strain it to remove the grit. I also cut the sugar entirely. But it is delicious!!! My new comfort drink.

Great. And the sweetener is definitely something you can tinker with to suit your palate.

Read your recipe which sounds like western version of indian tea.
We indian make tea in many diffrant way but don’t add cenila extract and honey as it is very unhealthy to add honey in hot beverages .

As per ayurveda honey cannot be heated and cannot be kept in freeze it looses its benefits.
You can add in to warm cup of tea from top but can’t boil it with water.

Interesting perspective about ayurveda, since I’m not well versed in the practice. It would be entirely doable to hold off adding the honey until the tea is done and then stir in when warm.

Just curious as to why you left out black peppercorns? Imho they are an important ingredient, as they are a stimulant similiar to caffeine and lend a comforting heat to the tea that would surely be missed. I’m guessing it was an accident but if you haven’t tried chai with black peppercorns you should! It definitely adds a kick and takes it up a level. Enjoy! 🙂

Thanks for the tip! I will try it with black peppercorns next time.

Coulda person use powdered ginger? If yes, how much do you think?

I think that would be fine. I’d suggest trying 1/2 teaspoon to start. Add it when you add the other ground spices.

I have made this several times over the past month or so. It’s delicious and warming and so easy to make. As someone else mentioned, I also strain it before adding the milk. Just personal preference, I like to make it without sweetener and use 1 C oat creamer in place of milk. I love it, thank you!

Thanks Susan. Your comment makes me want to go make a pot right now!

My brother introduced me to Chai tea at an eating place and I totally loved it. Was at first sceptical but he said try it first.

I love your easy recipe and wonder as a diabetic person if the sugar can be replaced with artificial sugars?

Yes. You can sweeten it with whatever works best for you. Liquid stevia might be a good one to try.

I just finished making this for the first time. I can taste the potential, but I wish the recipe would have told me I’d ned a milk bag to strain all the spices afterward. I can taste all the powder and it’s very offputting. I followed the recipe, however since it’s my first time, perhaps did something wrong, not quite sure!

Hi Rebecca, This recipe doesn’t require a milk bag. You just need to remove the cinnamon stick, ginger slices, and tea bags. The other spices should dissolve into the liquid as it heats.

haven’t made it yet, but will as a friend made it said it’s “to die for”!
bet using the base and milk for coffee is just as delish!