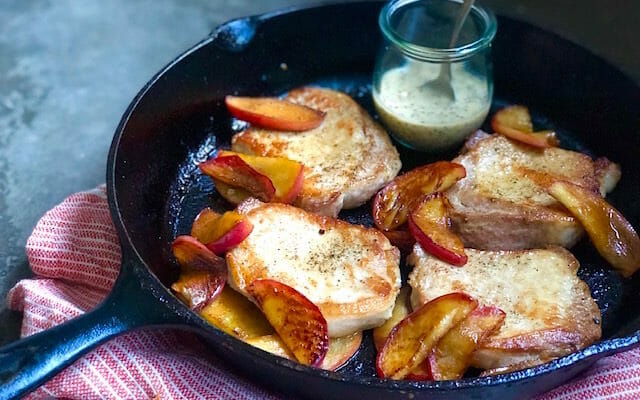 Despite my propensity to eat a mostly vegetarian diet, I joke that pork is the primary reason I haven’t gone whole hog on plant-based eating. Whether it’s thinly sliced prosciutto or a roasted tenderloin, I do have a thing for pork. These Easy Pork Chops with Apples are no exception. They’re simple to make and excellent for a weeknight supper.

You start by seasoning boneless chops with salt and pepper and get them going in a hot skillet. While those cook, thinly slice an apple, which you’ll sauté in the same pan where you cooked the pork. Then it’s just a matter of stirring together a tangy mustard sauce to spoon over the top, which will take you all of one minute to assemble.

The Easiest Pork Chop to Cook

This recipe calls for boneless chops that are cut from the loin, which means they cook quickly and evenly with little guess work. Because the meat is so lean, it’s key not to overcook it. If you have an instant read thermometer, now is the time to pull it out. I aim for a max of 140 degrees in the thickest part of the chop. The pork will continue to cook as it rests, so that number will rise even after it’s pulled from the skillet.

How “the other white meat” measures up in terms of nutrition all depends on what cut you choose. Across the board, pork is a good source of protein as well as B vitamins and zinc. The cuts I recommend the most are the tenderloin and loin, since they’re the leanest of the bunch. Processed pork products, such as bacon and sausage, on the other hand, are high in saturated fat and processed with nitrates (a preservative linked to cancer). That doesn’t mean they’re entirely off limits, just that it’s best to enjoy them less frequently and in moderation. Regardless of what cut you buy, trimming the visible fat will minimize the amount of saturated fat on your plate

What about Pork and Sustainability?

As a broad category, there’s no doubt that plant foods beat out animal products in terms of sustainability. They’re less taxing from an environmental standpoint, both in terms of water demands and carbon output. Within the animal kingdom, however, it’s worth noting that pork has a lighter carbon load than beef, goat, and lamb. Regardless of what I’m choosing from the butcher case, however, my approach is to eat less of it, less often, buy good quality, and enjoy every bite.

A Smaller Portion of Pork

Along those lines, you’ll note that this recipe doesn’t make a giant portion. The suggested number of servings is one (smallish) chop per person. Try filling the rest of your plate with heaps of vegetables, salad, and potatoes or a favorite whole grain. It will be a more sustainable plate with piles of produce, which is a win, win, if you ask me. If that serving size doesn’t work for your family, feel free to scale up the recipe. You’ll get no judgements from me.

If you like these Easy Pork Chops with Apples, check out:

Honey Hoison Pork Tenderloin from Smart in the Kitchen

This is a quick and easy way to get a pork chop supper on the table in under 15 minutes. This isn’t a generous portion, certainly by American restaurant standards, so be sure to heavy up on the veggies and other sides. Feel free to scale the recipe up or down depending on how many are at your table.
Course Dinner
Cuisine American
Keyword easy pork chops with apples
Prep Time 5 minutes
Cook Time 10 minutes
Total Time 15 minutes
Servings 4
Calories 240 kcal
Author Katie Morford

Made this last night. delicious, my husband liked it too. Definitely a keeper
The only change I made was using plain yogurt for sour cream

This was delicious and extremely quick to throw together! I used nonfat Greek yogurt in place of the sour cream and a pear in place of the apple. I also roasted some root veggies to have on the side, and the flavor combination was amazing! Love a weeknight meal that’s ready in 20 minutes and has such a beautiful presentation.

My husband and I liked this recipe a lot! I used aunt jemima syrup so I added a little more to make up for the sweetness..

I’m so glad you liked the recipe!