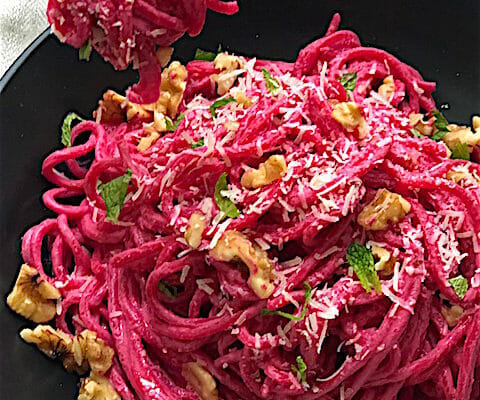 Waiting. It’s a part of parenting that nobody seemed to mention before I became a mother. And there’s an awful lot of it. Waiting in carpool lines and on soccer sidelines, waiting for bedtime when they’re toddlers and for kids to make curfew when they’re teens, waiting in doctor’s offices, orthodontist offices, physical therapy offices and every imaginable type of office under the sun.

It took me a while to come to terms with all the waiting and it’s only been in the past few years that I’ve discovered something worthwhile to help pass the time: podcasts. I’ve got at least half a dozen loaded onto my phone to keep me company while I wait.

This brings me to today’s recipe, which I learned about on Radio Cherry Bomb, the podcast that played as I waited for my daughter to finish track practice last week. As the host and her guest waxed poetic about a pasta dish with beet sauce I went from being intrigued to being hungry to making a mental checklist of the ingredients I’d pick up on the way home:

Back in my kitchen with hungry teenagers afoot, I set to work. It came together with ease and the finished dish was so good, I ate much of it hovered over the bowl on the kitchen counter. I’ve made it two more times since then, tinkering with the recipe to simplify the method and shear off some of the saturated fat.

I’d venture to say that you don’t even have to be a beet lover to enjoy this. Consider, for example, my youngest daughter, who says, “beets give me the shivers”, yet polished off her plate at dinner and packed it into her lunch the next day. That’s a recipe worth waiting for.

The shocking pink of this pasta is a combination of tender beets and ricotta blended into a creamy sauce. The method is simple and the results, delicious. Chopped walnuts and Parmesan make a flavorful finish.

This looks so delicious and beautiful! Can’t wait to make it! 💚

It’s a fun one to do if you have company coming because it’s such a dramatic color. Just be sure to assemble it right before serving because it doesn’t like to sit.

Looks like we have found our Valentines Day Dish! Cant wait to give it a try!

I hope Sarah loves it as much as I do.

This looks delicious! I was planning to make my roasted red pepper and tomato pasta tonight, but change of plans now that I saw this!

Hope your sweet girls are wowed by the hot pink!

This was outstanding. Creamy and delicious. A keeper! Had a lot of extra sauce…maybe my beet was really big!

So glad you liked it! Hope you were able to make use of the extras.

Made tonight as a pre Valentine’s meal and got high marks from the whole fam! The consistency of the sauce was smooth and moist and the walnuts were a great addition. Yum!!

Wow…so glad it was a hit all around. That makes my day 🙂

Made beet Malfatti but beet flavor got lost with the flour so this will boost the beet a beat! Thank you.!

making this with a couple of friends for a year 10 ready steady cook competition, it’s so far going to get us good marks. Creative, colorful, difficulty level is up for us as we’re making our own pasta and incorporating beets to it.

I’m honored! Good luck to you.

Delicious, we made it with coconut milk instead of the cream and it gave it a wonderful flavour We will make it again.

Great! So you used the coconut milk in place of ricotta? I’ll have to try that. Thanks for the comment.

I’LL try it, Amy!! Mostly because it looks YUMMY! But also because you’re pretty groovy.

That’s really delicious recipe, It makes me starving right now. I have to try this for my family tonight. Thanks for sharing!

Sorry I usually hate posting bad reviews, but this was REALLY bad. The sauce just tasted sweet and there was no complexity of flavors whatsoever. No spices? And there was way too much of the sauce as well to the point that the pasta just drowned in it. It was a soupy, inedible mess. Really disappointed and upset.

Sorry to hear that, Alex.

Just made this with a few mod’s … used precooked beets that I had on hand, left out salt for my reduced sodium diet … there’s plenty in the cheeses! Added a clove of garlic and black pepper, and subbed a mixture of raw, unsalted chopped seeds and nuts for the walnuts. We really liked it … and the ‘base’ flavors are tame enough that you could make all kinds of variations. Will make again!

Thanks for sharing all your riffs on the recipe!

Delicious I made it with coconut milk instead of the cream and it gave it a wonderful flavour. I will make it again.

Beet pesto? ROASTED beet pesto?? Oh. My. Gosh. Where little odd one doesn’t like beets (or does her man), her daddy and I LUV the things. So, I need to make this pronto-tonto. I have a long list of things to make when you come to live with us. Starting with pimento cheese. 🙂
Thank you!

This was seriously one of the most delicious things I’ve ever eaten!!! AND THE COLOR! It was fantastic! Thanks for a great new way to use up my beets!

Oh my goodness, that is music to my ears. Thanks for sharing your feedback!

Hi,
I tried this recipe at home yesterday, and it turned out to be really delicious..
Thank you so much for such a yummy recipe.
Gonna save this and will share with others.
Keep sharing 🙂

Such a beautiful pasta! Love it!

Yay! The color is really pretty.

This was fantastic! It’s my new fav pasta sauce. I didn’t have ricotta on hand and used goat cheese, which worked beautifully. I also likes a little extra squirt of lemon on top. Mint shouldn’t be optional. I am thinking sautéed leeks on top next time. Thank you!

So glad you enjoyed it. Love all your ideas!

WOWZA! This recipe was great, fixed it for my boyfriend and I last night as he was coming over for dinner to try something new with beets. I’m gluten free and trying to limit my dairy content – so I swapped out the ricotta for nutritional yeast, then used 1/2 cup of pasta water instead of a 1/4 cup and used bonza penne pasta. Also added in fresh thyme into the mixture in the blender and topped it off with red chile flakes and dried thyme. My boyfriend said it was so good he preferred it over marinara! 10/10 recommend